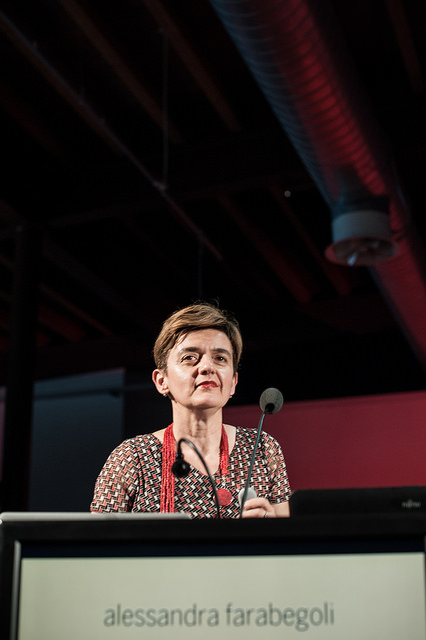 Passioni – il mio speech a State Of The Net

When I was asked to give this speech about passions, I asked some of my friends what passion is for them, what are their passions, and how Internet has influenced the way they live their passions.

Here is Silvia – she’s a copywriter. These are her business cards: words are her passion, in any form they take: written, spoken, listened.

Silvia says that Internet has allowed her to transform her passion in a job, by letting her find someone who wants to read what she writes, and someone in need of her ability to write and to manage conversations.

This is Renato – Renato is an entrepreneur – a successful one, as well. He’s a biker, he loves photography – and if you notice here, he’s also a fan of Bruce Springsteen – he has got a ticket for almost any concert of the Boss in Europe. For Renato’s passions, Internet has been a revolution, making everything easier or even possible.

Renato says that Internet is like a drug that feeds his endless curiosity – for people, stories, trends and tools. But he also thinks that making things easier, sometimes, has reduced the pleasure, has made some experience less intense. When you listened to music on vinyl, you had to stop, stay at home, in your room. Now music is everywhere, so, in a way, you take it for granted.

She is Francesca – Francesca is a storyteller. Many of the stories she tells are about Elba island, where she’s been living for 15 years. She defines her life as full of passion: reading, travelling, trekking, meeting people and listening to their stories. Francesca says that Internet has been a powerful enzyme, which activated connections, allowed her to meet people, to take part in conversations and events that otherwise wouldn’t have been possible; a catalyst of her new life.

This is Gianluca – Gianluca says he has no passions. He considers himself a sort of entomologist, observing – from a distance – other people’s passions: the choirs of football supporters, the business model of a frozen snacks dealer, the strategies of online poker players, everything people is passionate about.

Gianluca says that having only one big passion would be boring: instead, he can change continuously his object of interest. Internet for Gianluca is sort of a wonderful vending machine, dispensing other people’s passions for free – any kind of interest, any form of enthusiasm is just a click away.

And now, Biljana. Biljana on the contrary says she has all passions, and she feeds them with the information and advice given by truly passionate people: music, movies, sports, typography, food, whatever.

Biljana says that having only one big passion would be boring, instead she can change continuously her object of interest, building her life as an anthology rather than a monograph.

For Biljana, Internet is a wonderful repository of passions – she says “I lived well also before Internet, but now it’s better”.

I recognize something of me in all of my friends – by the way, I met all of them thanks to the web, so when somebody says that online you can’t make real friends, well, they’re wrong.

As a former biologist, I sometimes joke with the entomologist approach, but most of the times I think of myself as a multi-passionate woman, like Francesca and Biljana, because I put a lot of passion in all the things I do, and and because my life has been – and is – full of many passions. None of them was actually all-consuming – even tango, probably the strongest of them, left some free space in my heart, to become passionate about something else.

If I look at my life, before and after the advent of Internet, life before Internet seems to me so dull – I remember the years I was studying and living in Ferrara – I graduated in 1988 – bored and lonely, and how it was difficult to find somebody who shared the same interests I had.

During those years I happened to go to see a tango show, in a theater, and I was struck by the beauty of the dance, by its intensity and sensuality. I wanted to learn to dance tango – but it seemed almost impossible: no teachers, no schools, nobody to dance with – so I let the idea fade away.

Those were the years when a telephone call was something you did in a room – no cell phones, no emails; to keep in contact with friends abroad we wrote letters by Air Mail – it seems romantic, but it actually was rather frustrating at times.

When Sally Potter in 1997 released The Tango Lesson movie, she aroused again my forgotten passion, and I found a small bunch of people who wanted to try to set up a tango school in Romagna. Keeping in contact was easier now: we had lists of emails and cell phones, we found a maestro, and we could start our first tango school. We put on regular classes, practicas (the free training sessions) and milongas, and we organized workshops with the best dancers around.

When we had a great couple – say Gustavo Naveira and Giselle Anne – we video-taped their little show at the end of the lesson or during the milonga, to study every detail of their dance – good videos were rare, those handmade cassettes were something precious. So was the original music. Now if I google Gustavo Naveira, I find thousands of videos, and if I want to listen to good tango music I just open Spotify, there are playlists and radio stations, ready to start a milonga right now.

So, living a passion is much easier now, and this is definitely good. But sometimes I feel overwhelmed by too many opportunities: should I spend next hour going out to walk (and share my workout on Runkeeper), or practicing calligraphy (I met online my teacher, Monica Dengo), or making sourdough bread (with the help of the sourdough community online), or making a hat that I found in a blog on crochet, or whatever?

You know, information overload is a serious problem – people write books about it! – and for me it is vital to find and maintain my own focus, my balance. And again I find valuable help in technology.

Thanks to an app, I’ve built the good habit of practicing yoga every morning; it is easier than going out to the gym, so I have no excuses, and I do it.

Online I even discovered a technique of meditation that takes only one minute – which is perfect for me to relax before giving a speech and to make mindfulness fit in my busy agenda.

So, I believe I can dance through my life enjoying so many passions, staying true to myself and really becoming the woman I am – it is not easy – but I can find my way by looking forward, not backward.